A couple of years ago, the Leopard’s Jon B and Danny did some traveling of their own - not quite around the galaxy, but around the coast of the UK anway, trying to visit every seaside pier going. On towel day, here’s a little excerpt from the book about the trip ‘Pier Review’, of a thing that really happened to them that is very aposite (Danny goes first)… 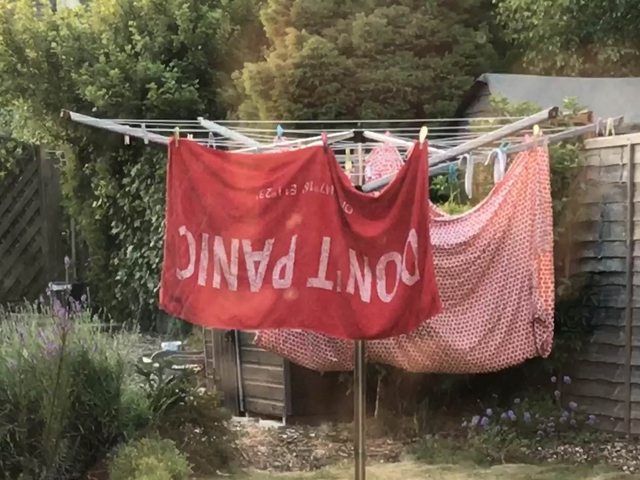 I see his face ashen. Jon hates answering the phone at the best of times but recently I have got the impression that time spent away from the real world, faced with the enormity of nature is more useful to him than just a holiday. He steps away and when he comes back he’s running his hand through his hair:

“You know that bag?”

“The one that definitely wasn’t yours?” I ask.

“My towel, T-shirts, and my toilet stuff.”

To the left, underneath one of the sea barriers on the beach, a shrug of teenagers sit chatting and throwing stones at the sea, not laughing at Jon, but laughing.

This is the second towel I’ve bought since we set off. It, being new, will leave fluff stuck to me when I wash in the morning. For us slightly bookish, slightly alternative, kids of a slightly certain age the towel means Douglas Adams. And it means much more than that. Because if a traveler has a “towel with him, [another person] will automatically assume that he is also in possession of a toothbrush, face flannel, soap, tin of biscuits, flask, compass, map, ball of string, gnat spray, wet weather gear, space suit etc., […] any man who can hitch the length and breadth of the galaxy, rough it, slum it, struggle against terrible odds, win through, and still knows where his towel is is clearly a man to be reckoned with.”

I’m not only Arthur Dent, but even more adrift. Except, I know where my towel is.

The Isle of Wight.

You can find out if they make it in Pier Review: A Road Trip in Search of the Great British Seaside